There’s a lot of talk amongst evangelicals about diversity and why Dr. King’s statement of Sunday being the most segregated day of the week still exists. There are a ton of blogs and sermons on the subject and with the landscape of America changing if we’re honest the Church is late on this issue, but as in all things there’s grace for us leaders trying to change our homogenous expressions to reflect a more diverse display which accurately reflects the city in which we exist. I recently had a convo with another African-American pastor who doesn’t think diversity is something we should pursue and his reason was “white people won’t follow us,” and as a result he sees nothing wrong with an 100% African-American church.  I’ve spoken with a Caucasian pastor who’s reason for not seeking it as a priority is “homogeny is easier to manage and multiply,” this pragmatic approach was enough for him and his elders to totally ignore a segment of the population. The responses are all over the board and I’ve even experienced people leaving the church I pastor because they felt like reaching out to other cultures was somehow selling out to the majority culture and seeking “acceptance.” This is clearly a hot button topic with a myriad of views, but I rejoice in the fact that there are many willing to be uncomfortable and even lose people to fight for something that is clearly a byproduct of the gospel. Let me be clear diversity isn’t the gospel, but diversity is the fruit of the gospel being preach, pursued and propagated in diverse context. While I rejoice in the fact that many are talking about and more importantly pursing this truth, I think it’s important that we clearly communicate our goal: authentic gospel-centered community. In other words we want more that just blacks, whites, Asians, Latinos, Indians, etc. coming to a service, but we want them engaging in each others lives. Albert Tate says it best in Letters to A Birmingham Jail, “the question isn’t guess who’s coming to church”, but rather guess who’s coming to dinner?” (168). We have to think beyond a Sunday gathering and onto actual life-on-life engagement.

Here are five things I think we can do to pursue and realize diverse gospel-centered community:

We have a ton of interracial couples, mixed babies and people of different races at our church and I love it. I’ll admit we’re only at 20% non-African-American, but last year we were only at 5%, so God is at work as we intentionally pursue this. I want to intentionally celebrate marriages, engagements, new members and ministry that’s happening. We do this whether people are of the same race or different races, but celebrating the diversity you have even if it’s small is HUGE for those that are the minority within your congregation.

It’s not enough to have a black emcee or sing at a predominately white congregation or vice-versa, it’s vital that you’re actively seeking to empower people of different races on the executive level of your church. I’m not saying to make someone an elder just because their different racially and culturally, but in order to have diverse eldership/leadership it has to be something that you intentionally pursue. If you allow the other races to ONLY sing, emcee or lead prayer it’s just a matter of time before the work “tokenism” will come up and you’ll have to own it. Yes, this gets dicey and tricky, but again the fight for diverse community goes beyond just a diverse worship service. It must involve diverse ideas and leadership on the executive level. I’m not against the aforementioned of having diverse choirs, praise teams, emcees, etc., but let’s be internal about not stopping there.

3. Learn the Stories of Others

It’s hard to appreciate anyone from a distance and it’s vital that we read, listen and watch those that we want to worship Christ with us. It’s good to ask for books, preachers, teachers and historians that will help you understand the cultures of those that are in your church. This will make people feel welcome and like you genuinely want them to be part of your church family. I’m not presenting this as a marketing strategy, but we should genuinely want to know those around us as a response to the gospel we’ve received.

4. Acknowledge your Own Prejudice

As much as we talk about the depth of sin and how dark our hearts are without Christ it seems like many evangelicals think that sin as it relates to race is a “no fly zone” that no one struggles with. You and I have prejudices and it hurts to admit it, but by God’s grace he reveals them to us so we can turn from them and turn to Him. Pursuing diversity will actually reveal more prejudice than you and I know about ourselves and while this may sound like a bad thing, it’s actually a good thing. The sooner we own it, the sooner we can turn from it. I say this all the time the gospel is not color blind, it’s color-engaging. I don’t need to be blind to those around me that are different and I don’t need to act like I don’t at times make assumptions about them, the key is to not be led by those assumptions and prejudices and allow God to use a diverse community to shape us more into his image.

If you’re pursuing this because we’re in a fallen world someone in your church is going to make a joke, statement or act that offends someone of the opposite race. This is why the gospel is so central because we need allow people to make mistakes, but not enable outright sin as it relates to the thoughts and actions toward others, but make no mistake about it, grace will be needed daily, but if we pursue diversity beyond Sunday we’ll see our people develop a genuine appreciation for each other.

I’m praying for you as you aggressively pursue diverse community in your city. What a beautiful testimony it is to see people that normally wound’t hang together united around the gospel. I’ll end with this story:

We recently had an 86-year old man join us for one of our worship gatherings. He came with one of our elders, he and his wife shared with my elder how much they enjoyed the service and how it blessed them, but there was something he shared with Pastor Irvin (an elder at Vision Church) that stood out to me. He said that he had never seen whites and blacks worship Christ together in all of his years of going to church. Think about that, 86 years on this earth and he had never seen it. A white young lady that sings on our praise team also greeted and hugged him and he said that was the first time anyone white had intentionally embraced him. He was blown away, but what was he blown away by? It wasn’t the fact that Lizzie (lady from praise team) is white, but that the gospel brought us together and leads to engage and embrace those that are different than us. I pray that this vision will encourage you to pursue this aggressively, because you never know who will be blown away by what the gospel does when set set-aside cultural preferences and pursue the gospel out of love for Christ and love of neighbor. 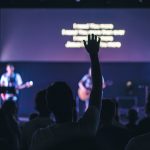